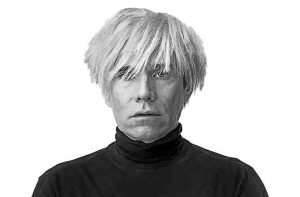 This exhibition examines the intersections between pop artist Andy Warhol’s longest running project, Interview magazine with his television ventures and his portrait commissions of the 1970s and 1980s.

During this late period, Warhol transformed his studio, hired young associates and produced an entirely new and separate body of work in print media, television and commissioned portraits that redefined the relationship between business and art, and generated a social network entirely his own.