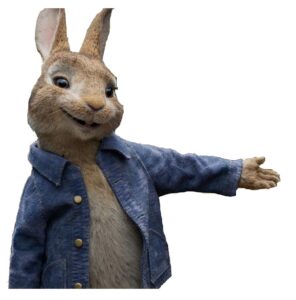 One of literature’s most beloved characters returns to the big screen in this 2021 computer animated sequel to the popular 2018 film.

That character is Peter Rabbit, a human-like rabbit who wears a blue jacket with brass buttons and shoes. He lives with his mother and sisters in a rabbit hole equipped with a kitchen, furniture and a shop where Mrs. Rabbit sells various items. Peter was first introduced in a children’s book in 1902 by English writer Beatrix Potter (1866-1943).

In this sequel, Peter (voiced by James Corden) goes to the big city, where he meets shady characters and ends up creating chaos for his whole family.