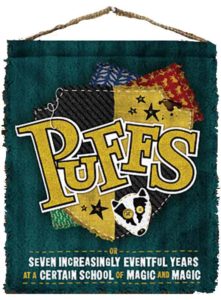 This clever and inventive musical play offers a fun twit to the popular Harry Potter tales.

Harry Potter is the central character in a series of novels written by British author J. K. Rowling and first released in 1997. Harry is a young wizard who discovers his magical heritage on his eleventh birthday when he receives a letter of acceptance to Hogwarts School of Witchcraft and Wizardy. The novels follow Harry and his friends battling the forces of evil while facing the challenges of adolescence. The first of eight films was released in 2001.

“Puffs” is not another story of the boy wizard. Rather, it’s the tale of three potential heroes just trying to make it through a magic school that proves to be very dangerous for children. Alongside them are the Puffs, a group of well-meaning, loyal outsiders with a thing for badgers. Their epic journey takes the classic story to new places and reimagines what a boy wizard hero can be.