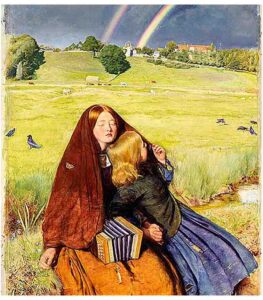 Featuring works by pioneering artists, this exhibition represents the spectrum of avant-garde practices of the Victorian era, emphasizing the response of Britain’s first modern art movement to the unfettered industrialization of the period.

What scholars call the Victorian Era refers to the period of British history marked by the reign of Queen Victoria (1819-1901), which began in 1837. This era saw a staggering amount of innovations, political reform and strict moral standards. During this time, three generations of young, rebellious artists and designers revolutionized the visual arts in Britain by engaging and challenging the new industrial world around them.

These creative people are often seen as part of two groups. One, called the Pre-Raphaelite Brotherhood, sought a return to the abundant detail, intense colors and complex compositions that appeared in Italy before the mannered styles popularize by artists such as Raphael Sanzio da Urbino (1483-1520). The other were champions of the Arts & Crafts Movement which offered a radical artistic and social vision inspired by the pre-industrial past. Their work deeply influenced visual culture in Britain and beyond.

These artists’ attention to detail, use of vibrant colors, and engagement with both literary themes and contemporary life are illustrated through a selection of paintings, drawings, and watercolors presented alongside outstanding examples of decorative arts.