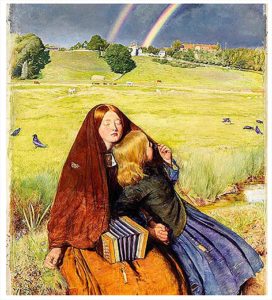 This exhibition represents the spectrum of avant-garde practices of the Victorian Era, emphasizing the response of Britain’s first modern art movement to the unfettered industrialization of the period.

What is commonly called the Victorian Era refers to the period when Victoria (1819-1901) reined as Queen of England starting in 1837. This was a time of important political, economic and technological changes as well as a sense of strict propriety. During this time, three generations of young  artists and designers revolutionized the visual arts in Britain by engaging and challenging the new industrial world around them. Among their options were The Pre-Raphaelite Brotherhood, which sought a return to the abundant detail, intense colors and complex compositions of artist like Raffaello Sanzio da Urbino (1483-1520). Another was the Arts & Crafts Movement, which stood for traditional craftsmanship using simple forms, and often used medieval, romantic or folk styles of decoration.

Organized from the outstanding collection of the city of Birmingham in the United Kingdom, “Victorian Radicals” brings together an extensive array of works — many of which have never been exhibited outside of the UK — to illuminate this dynamic period of British art.