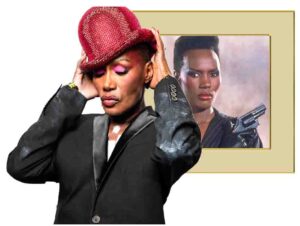 Grace Jones is a groundbreaking musician, model, actress and performer. Born in Jamaica in 1948, (or 1951, according to Jones), she began modeling in the early 1970s and released her first album that same decade. By the 1980s Jones had become an in-demand vocalist and Hollywood actress. Jones was a fearless multidisciplinary entertainer who relished attention–unapologetically androgynous, theatrical and inventive. Andy Warhol and Jones met in the mid-1970s, drawn together by mutual friends and shared interests. While no one remembers the specific circumstances of their first meeting, Jones recalls in her memoir: “One minute you don’t know him, and then you do.”

The two remained lifelong friends. This installation highlights Jones as a cultural sensation, showcasing her career from the 1970s through the 1980s. The gallery includes portraits by Warhol, over 30 photographs and dozens of archival items related to Jones and the formative years of her career. Jones continues to perform and remains an active provocateur and inspiration.