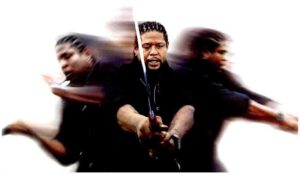 Forest Whitaker delivers a powerful performance in this 1999 film as a mafia hitman known simply as Ghost Dog who follows the ancient code of the samurai as outlined in the book of Yamamoto Tsunetomo’s recorded sayings.

After successfully killing one of his boss’ enemies, Ghost Dog soon finds himself the man’s next target after Dog mercifully allows a witness to the murder to remain alive.

The samurai were hereditary military noblemen in Japan from the 12th to the 19th centuries. They were known for high virtues and unflinching loyalty to the emperor. Much of the samurai’s history and wisdom was documented by one of its own, Yamamoto Tsunetomo (1659-1719).

Before the screening, a disc jockey will be spinning tunes and graffiti painting.