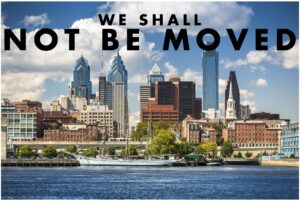 On the run after a series of tragic incidents, five North Philadelphia teens find refuge in an abandoned, condemned house that was once the headquarters of the communal organization MOVE.

MOVE was formed in 1972 by activist John Africa (1931-1985) and advocated a controversial form of Black Power while opposing science, medicine and technology. The organization’s protests often brought it in conflict with residents and authorities. It has also faced claims of physical and emotional abuse as well as homophobia. Several MOVE members were sentenced to prison after 1978 shooting incident. An infamous 1985 standoff with police —who shocked the nation by dropping two bombs on the MOVE house — ended with the srrounding neighborhood destroyed and 11 people dead, including John Africa and five children.

The five youths in “We Shall Not Be Moved” have created a self-defined family that is assuaged and even inspired by the ghosts who inhabit the home and begin to see their squatting as a matter of destiny and resistance rather than urgent fear.

The opera’s title is inspired, in part, from that of an early 19th century slave protest song. Presented by the Pittsburgh Opera, the eighth oldest company in the United States.