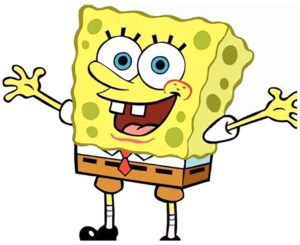 Computer animation and live action are blended in this 2020 film following SpongeBob SquarePants on his most exciting adventure.

SpongeBob SquarePants is title character in a popular children’s animated television series that debuted in 1999. Bob is a sea sponge who usually wears brown short pants, a white collared shirt, and a red tie. He lives in a pineapple house and is employed as a fry cook at a fast food restaurant in the fictional underwater city of Bikini Bottom. Bob was created by writer and animator Stephen Hillenburg (1961-2018), who was also a marine science educator.

The film recounts how SpongeBob met his pal Gary the Snail, including SpongeBob’s quest to rescue him after he is kidnapped.