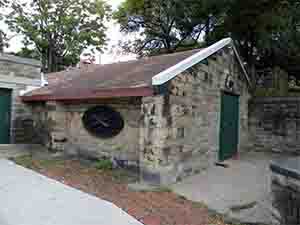 What is now Arsenal Park was originally the an important supply and manufacturing center during the American Civil War (1861-1865).

The Allegheny Arsenal was established in 1812 by the U.S. Army because its location near the Allegheny River made it convenient for equipping soldiers heading west. At the time the neighborhood, called Lawrenceville was a Pittsburgh suburb that became known as the hometown of composer Stephen Foster (1826-1864). It was annexed by the city in 1868.

A famous incident in the site’s history happened on September 17, 1862 when an explosion occurred that not only shattered nearby windows but was heard two miles away. The exact cause remains unknown and 78 people lost their lives.

Today, the site is a beloved historic city park located within one of Pittsburgh’s most popular neighborhoods.