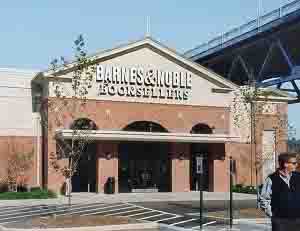 Barnes & Noble is the largest book store chain in the United States.

The company began in 1917 when recent Harvard University graduate Gilbert Clifford Noble (1864-1936) bought a New York City book store with his partner, William Barnes (1867-1945). It remained in the care of their families until the company was sold to a conglomerate in 1969. Entrepreneur and businessman Leonard S. Riggio acquired Barnes & Noble in 1971 who took it public several years later.

This store is located at the Waterfront, an open air mall located just outside the city situated on the site of the former Homestead Steel Works (1881-1986).

Like other outlets in the chain, the Waterfront store features a Starbucks Coffee café and an upscale but welcoming environment.