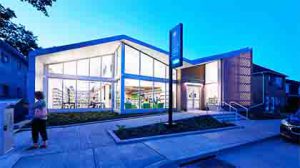 This branch of the Carnegie Library has been serving the city neighborhood of Beechview since 1967.

Established in 1890 through a gift by industrialist Andrew Carnegie (1835-1919), the Carnegie is Pittsburgh’s public library system with 19 branches scattered throughout the city. Beechview was established southwest of Downtown in 1905 to serve the growing city during the region’s industrial boom. The neighborhood’s name is derived from the many beautiful beech trees found in its engaging hilly terrain.

This handsome, brick building is a fine example of mid-century design (including a charming water fountain) providing the neighbors with a variety of literary, learning and entertainment resources.