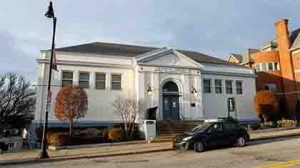 This branch serves the residents of Mount Washington, a city neighborhood just south of Downtown across the Ohio and Monongahela Rivers.

Established in 1890 through a gift by industrialist Andrew Carnegie (1835-1919), the Carnegie is Pittsburgh’s public library system with 19 branches scattered throughout the city.

Mount Washington is known for its steep hill overlooking Downtown’s magnificent skyline. Originally called Coal Hill, the area was renamed in the 1870s after United States President George Washington. For much of its history, Mt. Washington was a working-class neighborhood but it is currently beginning a new era welcoming a diverse population.

This branch is located inside a handsome, Colonial-style building with computer stations, meeting rooms and other facilities.