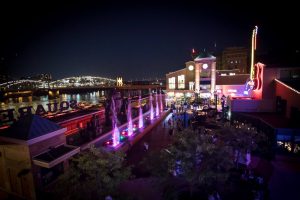 Station Square is an entertainment, office and shopping complex located in a former railroad center on the city’s historic South Shore.

The complex was originally constructed as the headquarters to the Pittsburgh & Lake Eerie Railroad (P&LE), a large transportation company founded in 1875 that specialized in hauling construction and raw energy material over long distances. It became part of the CSX Corporation in 1993.

As business conditions changed in the 1970s, so did P&LE’s presence. The non-profit Pittsburgh History & Landmarks Foundation took control of the property in 1976 and began converting it into a mixed-use historic adaptive reuse project. Most of the railroad’s original buildings remain, most notably the offices (now called the Landmark Building) which housed the train’s magnificent concourse where passengers arrived or departed. The concourse is now a popular restaurant.

The former freight house is another major component. It now houses restaurants, offices, a trade school and several quaint and interesting shops. The complex was acquired by real estate management company Forest City Enterprises in 1994.