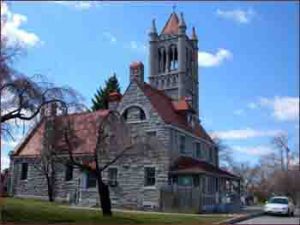 Conceived in the minds of Pittsburgh’s leading families and businessmen in 1844, Allegheny Cemetery is one of the oldest burial grounds in the United States.

The cemetery lies on the southern slope of the Allegheny River just a few miles upstream from the rivers junction with the Monongahela to form the Ohio. Rock outcroppings here are sandstone and shale, with gravel beds revealing river gravel of both sandstone and granite. Much of the latter is debris carried by glacial action.

In the monuments of the cemetery there are four major stone forms: sandstone, limestone, marble and granite. Sandstone markers are typical of the early graves since sandstone was the local stone.