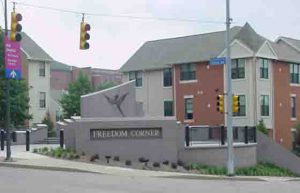 Located at the intersection of Centre Avenue and Crawford Street in the city’s historic Hill District section, this monument marks a critical point in Pittsburgh’s extensive Civil Rights history.

The Hill District is a collection of neighborhoods that, together, has been the cultural (and at times the political and economic) center of the region’s African-American community for more than a century. The area was an economically vibrant section until a decline began in the early 1950s that was exacerbated by unfortunate civic development projects. These projects forced the displacement of many long-time residents which began a series of peaceful protests that began at this site, which became known as Freedom Corner. A key moment came in 1963 when more than 2,000 Pittsburghers used Freedom Corner as the point of departure to witness D. Martin Luther King Jr. give his famous “I Have A Dream” speech in Washington, DC.

Recent efforts to revive the Hill are showing some success, with improved housing and even a grocery store. The monument at Freedom Corner is managed by the Urban League Of Pittsburgh.

STANDARD HOURS:
The monument is available 24-hours a day.