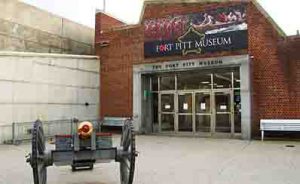 Fort Pitt is a partially restored British military installation that was the seed that became Pittsburgh and is now an indoor/outdoor museum.

Built in 1759 near the site of a former French garrison, Fort Pitt was designed to protect the Ohio River and nearby colonists in what historians call the French & Indian War (1754-1763).

The French & Indian War was an extension of the bitter Seven Year’s War (1754-1763) between the Kingdom Of Great Britain and the Kingdom Of France to determine which would be the dominate power in the Western World. The fort was named in honor of British statesman William Pitt (1708-1778).

The adjacent Fort Pitt Block House was built in 1764 and is the oldest extant structure in the region. It, like all redoubts, was designed to protect soldiers outside a larger fort.

Today’s museum is located inside a recreation of the fort in what is now part of Point State Park. In addition to documenting the region’s important role in the Friend & Indiana War, but Pittsburgh’s place in the American Revolution (1765-1783), the famous 1791 tax protest known as the Whiskey Rebellion and the foundation of the city as well. The Fort Pitt Museum is owned by the Fort Pitt Society and administered by the Senator John Heinz Pittsburgh Regional History Center.

PARKING:
The closest parking is in the Boulos Lot, which connects with Point State Park through a small tunnel and a pedestrian bridge.