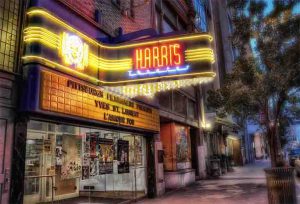 The Harris Theater is a cozy, 200-seat movie theater and event space that specializes in screening independent, classic and foreign movies. It was originally operated by Pittsburgh Filmmakers and is now programmed by the Pittsburgh Cultural Trust.

Founded in 1971, Pittsburgh Filmmakers is one of the oldest and largest media arts centers in the United States. It offers various classes and support to the region’s film and television community and produces the highly regarded Three Rivers Film Festival. The organization merged with the Pittsburgh Center For The Arts in 2010. The combined entity folded in 2019.

The theater is named in honor of John Paul Harris (1872 – 1926), a Pittsburgh businessman who is credited with opening the world’s first theater devoted entirely to showing movies in 1905. That theater was located a modest walk away on Smithfield Street across from what was then Kaufmann’s Department Store (and is now a Macy’s). Legend has it that a salesman at Kaufmann’s saw how popular the theater was and decided to enter the movie business himself. That man was Harry Warner (1881-1958), one of the founders of the Warner Bros. film studio.

Today’s Harris Theater is located in what had been a pornographic cinema from the 1960s through the 1990s.

PARKING:
The Smithfield-Liberty garage is located down the street. For more information, call (412) 391-1952.