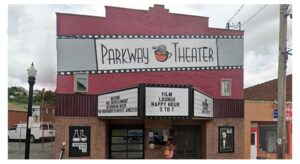 The Parkway Theater is the central component if the Community Reel Arts Center, whose mission is to enhance the cultural and economic vitality of the Stowe Rocks community and the surrounding neighborhood through the medium and art of film.

“Stowe Rocks”  refers to the neighboring suburbs Stowe and McKees Rocks. All locations in Stowe have McKees Rocks addresses. Both have a rich blue collar heritage and are in the process of reinventing themselves.

Facilities include a 45-seat screening room and a lounge/bar with a large-screen TV supplied by local beer company Abjuration Brewing.

The Parkway Theater shows films from local and Hollywood independent filmmakers representing a wide variety of viewpoints. Raising consciousness about film and its relevance to modern life and culture and integrating that understanding into community offerings to educate people about the possibilities for gaining a positive voice for change through film and the arts are mission goals of the Community Reel Arts Center.