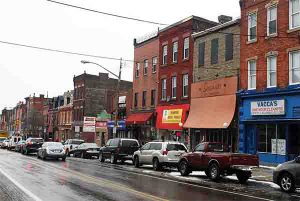 Named for the abundant wildflowers that once grew there, Bloomfield is situated on 449 acres near Downtown Pittsburgh. Bloomfield is sometimes referred to as Pittsburgh’s Little Italy because it was settled by Italians from the Abruzzi region and has been a center of the region’s Italian-American population for decades.

The business district is concentrated along Liberty Avenue, with a variety of businesses and services, most located inside handsome examples of early 20th Century architecture.

The Bloomfield Development Corporation seeks to support, promote and enhance the neighborhood.