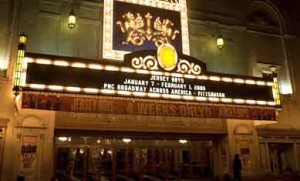 The Benedum Center is a theater and concert hall owned and operated by the Pittsburgh Cultural Trust.

The Pittsburgh Cultural Trust is an economic and cultural development organization established in 1984 It came into existence largely due to the initiative of local industrialist Henry John Heinz II (1908-1987), the grandson of Henry John Heinz (1844-1919) and founder of the food giant H. J. Heinz Company.

The Benedum was originally designed and operated to be a silent movie palace called the Stanley Theatre. It was complete in 1928 at the then-astounding cost of $3 million and was the largest movie house in the region with nearly 3,000 seats. The signature piece is the main chandelier which weighs 4,700 pounds, is 20 feet high and 12 feet wide. The theater was soon wired for sound pictures.

In the 1970s, the Stanley was used primarily for rock concerts, especially for those featuring major acts such as Bob Marley and the band Grateful Dead. The Pittsburgh Cultural Trust later acquired the theater and renovated it with the financial assistance of various entities including the Benedum Foundation.

The Benedum Foundation was established in 1944 to honor Claude Worthington Benedum (1898-1918) by his father, the energy entrepreneur Michael L. Benedum (1869-1959). Claude died at the age of 20 of influenza while serving in the US Army.

The theater’s interior was largely preserved and restored to its original design — including the famous chandelier — with the addition of a new acoustical baffle covering the original proscenium. Today, the Benedum is the home stage of the Pittsburgh Opera and Pittsburgh Ballet Theatre and routinely hosts major traveling shows,

PARKING:
There are two garages within a block of the Benedum.