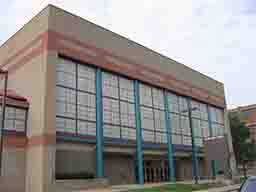 Opened in 1988, the A. J. Palumbo Center is the 4,400-seat sports and events facility of Duquesne University. The center resulted from a gift by mining entrepreneur Antonio J. Palumbo (1906-2002).

Duquesne University is a private, Catholic university established in 1878. It is named in honor of Michel-Ange Duquesne de Menneville (1700-1778), who was the governor general of France’s colonies in North America. He built the first fort at the point where the Ohio River forms and where Pittsburgh began.

The contemporary, cinderblock Palumbo is home to the university’s basketball, volleyball and wrestling programs as well as its athletic department.