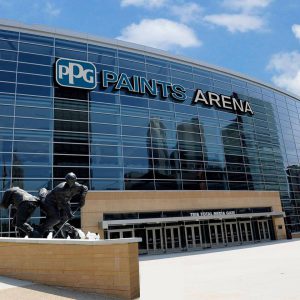 Opened in 2010, the Consol Energy Center (now called PPG Paints Arena)  is a multi-purpose sports and event facility that is the home arena to the Pittsburgh Penguins and the Pittsburgh Power.

The Pittsburgh Penguins was founded in 1967 and is the city’s professional hockey team. The Pittsburgh Power was launched in 2011 as the city’s professional arena football team, playing a version of American football indoors rather than the traditional outdoor field. Naming rights were originally sold to coal and gas production company Consol Energy. In late 2016, Pittsburgh-based coatings giant PPG Industries assumed those rights.

The arena can comfortably seat between 14,000 and 20,000 guests (depending on the event) and features a variety of eating establishments and a large shop selling Penguins fan memorabilia.