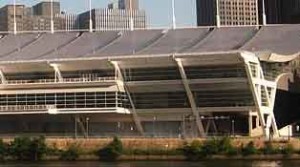 The center is named in honor of David L. Lawrence (1889-1966), who served as mayor of Pittsburgh from 1946 to 1959 and governor of Pennsylvania from 1959 to 1963. This accomplished leader was an early environmentalist who enacted a plan to clean-up Pittsburgh’s infamously polluted air and later played key roles in the presidential nominations of Franklin D Roosevelt (1882-1945) and John F Kennedy (1917-1963). Many historians also credit him as a protagonist encouraging the Democratic Party to be more involved in the Civil Rights causes of the 1960s.

This is actually the second convention center to bear the Lawrence name. From 1981 to 2000 a much smaller facility sat on the same site. It was demolished and replace by the current building, a magnificent, multifaceted structure featuring a swooping roof aiming toward to the adjacent Allegheny River.

The Dave L. Lawrence Convention Center was the first convention center to be awarded Gold status in the Leadership In Energy & Environmental Design (LEED) program of the US Green Council which recognizes designs that promote environmental responsibility.

PARKING:
A 700-car parking garage with an 8-foot clearance is available in the convention center.