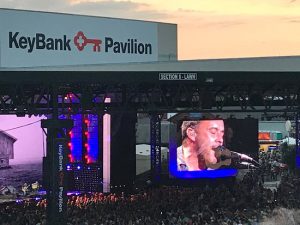 Burgettsown is a small town of 1,600 people in rural Washington County that dates to 1795. The pavilion opened in 1990 as the Coca-Cola Star Lake Ampitheatre with rock legend Billy Joel performing. Naming rights were granted to First Niagara Bank in 2010 and later to KeyBank. For a short period, the rights had been acquired by S&T Bank.

The pavilion holds about 23,000 people, most on a general admission lawn. It is owned and operated by Live Nation, a publicly traded entertainment company that specializes in stages big name concerts.