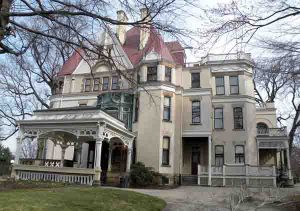 The Frick Pittsburgh (formerly Frick Art & Historical Center) is a campus of historic sites and museums centered around the mansion of Henry Clay Frick.

Industrialist, humanitarian and arts patron Henry Clay Frick (1849-1919) played a key role in Pittsburgh’s commercial and cultural development, including the establishment of the giant United States Steel Company and the Pennsylvania & Lake Erie Railroad. When the nearby town of Johnstown was flooded, Frick formed a relief task force to help its victims. After making serious mistakes during what became bloody strike at his own steel mill, Frick focused more on his arts patronage and charitable endeavors.

The Frick family’s mansion, called Clayton, is a beautiful Italianate-style house built in the 1860s. It served as the family’s main residence until 1905 when the Fricks began spending most of their time in New York City. Henry Frick’s daughter, Helen (1888-1984) returned to Clayton in 1981 to spend her remaining years there.

The mansion has seen few changes since its heyday, with the result a magnificent three-dimensional museum depicting life in the 19th century. The Frick hold exhibits, performances and other programs inside these historic structures and out on the lawn.